Posted on November 30, 2012 by writersinthestorm

Writers in the Storm is pleased to introduce you to Sherry Thomas. We were lucky to hear Sherry speak at an OCC RWA monthly meeting this fall and even luckier when she agreed to share her writing acumen  with us.

A detail for me isn’t the color of the wall, the precise shape of a button, or the precise combination of spices in a particular dish.  Or rather, it is.  But I will only work with a detail when I can connect it to the larger emotional theme of a story.

From Not Quite a Husband, which will always be a personal favorite among my own books. 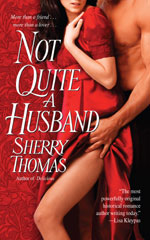 “From time to time she would be at the most incidental activity—lacing her boots or reading an article on the adhesion of the intestine to the stump after an ovariotomy— and a physical memory would barrel out of nowhere and mow her down like a runaway carriage.

The boutonnière he’d worn the evening he first kissed her, a single stephanotis blossom, pure white, as tiny and lovely as a snowflake.

The sensation of raindrops on warm wool as she placed her hand on his sleeve— he’d come personally to the curb to see her into her carriage—and the wonderful stillness of her world as he said, smiling, through the still­open carriage door, “Well, why not? It should be no hardship to be married to you.”

The almost prismatic glint of sunlight on the fob of his enameled watch—which she’d given to him as an engagement present. He held it suspended in midair, staring at its pendulum swing, while she asked for his cooperation in obtaining an annulment.

But mostly those upsurges of memory were nothing but ghost pains, nervous misfires from limbs that had been long since amputated.”

Each detail she remembers—the shape and color of the boutonnière, the sensation of rain on his sleeve, the sunlight reflecting off his watch—is connected to a central event in this couple’s history.

I chose such details rather than come right out and say, Their first kiss.  The day he agreed to marry her.  The day she asked for an annulment.  Words such as “their first kiss” definitely have power, but I like to enhance that inherent power with specificity and exactitude.  What makes that first kiss completely unique to these two characters?  What makes their story different from the story of the couple next door?  That’s what I look for when I search for details.

How do I locate such details?  Well, I pluck them out of thin air.  No exaggeration.  The point is not the details themselves, but what you do with them.

I gave a workshop not long ago on evoking emotions and decided two days before to revamp the section I had on using details.  That particular morning, when I checked the mail box, there was a holiday catalog from the Container Store, full of fun little stocking stuffers. 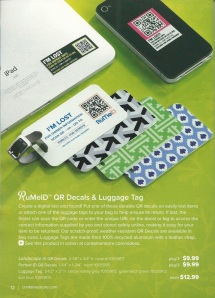 We don’t do stocking stuffers at our house, but I went through the catalog because it was full of CUTE.  My attention was caught by this particular bit of cute.

Our teenage son is on his fourth cell phone, so you can bet something that will help folks return his phone to him—or us—is of interest to me.

Then I thought, hey, that would be an interesting detail to use in my workshop.  But as I was trying to figure out how exact to use that detail without getting bogged down with too much explanation of how the QR decal works , my attention was caught by the cute on the exact next page—you can verify that it is indeed the next page by checking the page number.

Well, well, what do we have here?  And just about everyone knows how a USB thumb drive works. 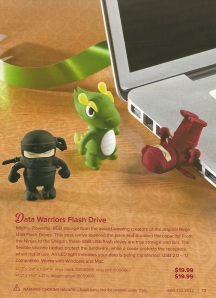 So here is one of the thumb drives in action.

“That’s cute,” said the passenger in the seat next to hers.

He pointed at her flash drive that was in the shape of a dragon, a green dragon with yellow eyelids, yellow spine plates, and a white belly.

“It’s my husband’s.  He loves dragons.”  It’s.  Loves.  Twenty months after Tim’s passing, whenever she wasn’t careful, she still spoke of him in the present.  “He even took me to a geekfest called DragonCon once.

The last good year.  Before his diagnosis.  Before three years in and out of the hospital. He was buried with his very first set of Dungeons and Dragons rule books and the Lego Millenium Falcon he’d put together when he was thirteen.

She’d almost put in the green dragon flash drive, loaded full of all their pictures through the years, into the casket.  But in the end she’d kept it, a memento of her wonderful geek, of all their happy years together, even though she never did make it through the first book of the Lord of the Rings, not even a hundred pages.

That was the example I gave in my workshop.  But suppose I’d never come across that page of fun, silly thumb drives, suppose all I had were the QR code decals.

No, problem.  It’s not about the details.  It’s what you do with them.

Her cell phone is old, its technology ancient, by current standards.  It has no GPS, no MP3 player, and only a most rudimentary camera.  The battery never lasts more than twenty-four hours no matter how diligent she charges it.  And the screen is cracked at the corner, from when it slipped out of her purse a few months ago.

Her mother has been asking her to get a new phone for ages.  But she keeps delaying.  She is used to the feel of the squat old phone in her hand.  She likes its gentle, friendly beeps. Whenever she waits at a red light, she turns the phone over and rubs her thumb against a peeling-off corner of the decal on the back.

Tim had put the decal in place long ago, her Tim who loved gadgetry and cool new things.  She was always forgetting her phone in restaurants and movie theaters—the QR code on the decal made it easy for the good people who found the phone to give it back to her.

But Tim wasn’t all digital.  He was pretty good in the analog world too–always bringing her keys and her purse from odd places in the house back to her nightstand so she’d be able to find them in the morning before she headed out for work.

She learned to do it for herself, eventually.  That’s how long he has been gone, long enough for her to finally become more like him.  Which would have astonished him, if he only knew.

So seriously, you can pick just about anything and make it a striking detail that evokes emotions.  To repeat, it’s not the details.  It’s the world, the history, the character you build around it.  And you enter it via the exactitude and specificity of details.

Do you have examples of how you’ve used details to evoke emotion in your story? Do you have any “how-to” questions?

One of our favorite WITS friends, Janice Hardy, just put this up at her amazing blog, The Other Side of the Story. 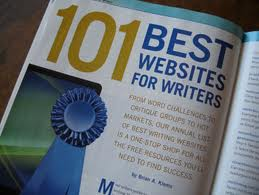 “Every year, Writer’s Digest puts out its 101 Top Websites for Writers. Considering how many fantastic blogs and sites are out there, it must be hard to choose just 101.

Right now you can nominate your favorite blog. Just email writersdigest@fwmedia.com and put “101 Websites” in the subject line. Then tell them why you think that blog deserves to be part of next year’s list.

Give a blogger a thrill. Nominate today!”
(And yes, we’d be thrilled beyond measure if you threw our name in the ring.)

Sherry Thomas is one of the most acclaimed romance authors working today.  Her books regularly receive starred reviews from trade publications and are frequently found on best-of-the-year lists.  She is also a two-time winner of Romance Writers of America’s prestigious RITA® Award.

English is Sherry’s second language—she has come a long way from the days when she made her laborious way through Rosemary Roger’s SWEET SAVAGE LOVE with an English-Chinese dictionary. She enjoys digging down to the emotional core of stories. And when she is not writing, she thinks about the zen and zaniness of her profession, plays computer games with her sons, and reads as many fabulous books as she can find.

Sherry’s next book, The Burning Sky, volume one of her young adult fantasy trilogy, will be available fall 2013.

This entry was posted in Blogging Guests, Craft, WriterStrong and tagged Sherry Thomas, Using Details in Your Writing, Writers in the Storm, writing. Bookmark the permalink.