The Things They Carry: Creating a Mobile Sanctuary for your Characters

Posted on April 4, 2014 by writersinthestorm 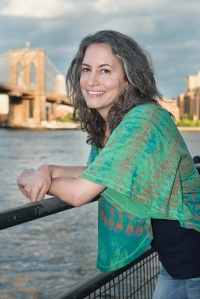 She keeps a lock of hair in her pocket
She wears a cross around her neck
Yes, the hair is from a little boy
And the cross is someone she has not met
Not yet

This verse from The Black Crowes’ “She Talks To Angels” always stops me in my tracks. Even though it’s a song, I think it would make a great creative writing prompt for fiction. It begs the questions Who is she? Does she know this little boy? What happened to him? Who gave her the cross? as well as the larger questions like Where is she going? and Where has she been? And come to think of it, why does she insist on carrying these items on her person, as opposed to stashing them in a drawer? What does she believe in?

Every day, we lug stuff around with us. In our purses, in our cars. Every house probably has a “junk drawer” where “stuff” goes. Does each little piece of miscellany have meaning? Probably not. But life is hectic and it’s hard to find the time and energy to tackle those items and keep them at bay.

As writers, we are constantly tossing things in and out of the junk drawer. A cool thought to save for later, a perfect emotion or detail to pull out when the time is right. We pepper our prose with the meaningful and the mundane all in the name of creating realistic, memorable stories. It’s our duty as word-weavers to give our characters “things” to help define them. Sometimes it’s as simple (and as essential) as a name, a profession or a pet. We stick them in houses by the beach, in penthouses near the sky. We give them friendships, relationships, enemies.

But a novel – like a song – has a set number of words, it is self-contained. Because word count is at a precious premium, we have to make those things mean something – to our characters, and hopefully to our readers.

In my first novel, Louder Than Love, I used place as a grounding force for my characters, creating a sanctuary from words and memory. It was easy – I had a widow who couldn’t face staying in Manhattan, where her husband had existed one day and not the next. So I made her flee with her young daughter to the place where she existed before she knew him: her hometown. I created a fictional sleepy suburb of New York City and gave my characters a nearby lake to visit when they were in need of solace or inspiration. This place set the tone and in a way, defined my two main characters, Kat and Adrian. The gentle, constant push-pull of the waves mirrored these two new lovers, as their relationship grew like a ripple in the water.

But my next novel posed an interesting challenge. Dictatorship of the Dress (Berkley, coming 2015) takes place in a span of five days and entirely in transit. The story follows two strangers, thrown together on the road: primarily in airports, planes, cabs and hotels. They’re stripped of most of their creature comforts: no home to cozy up in, no job with a desk to hide behind. How can you take characters out of their elements and still convey who they are and why they are the way they are? Their dialogue, their goals and their motivations move the plot and give us a glimpse. But how can we punch it up and create memorable characters without their usual surroundings?

With things. With stuff.

My heroine is a quirky comic book artist. Obviously she’s carrying her ever-present sketchpad with her. But I needed to give her other “things” to help define her, comfort her, and make her feel at home while she was in flux. I began to cull a motley assortment of items she just happens to have on hand in her carry-on and pulls out with uncanny and comedic timing. (Think Hermoine Granger’s handbag with the Undetectable Extension Charm in Harry Potter, just without the practical magic.)

It started with a Magic Eight Ball. Then a Batman alarm clock. And suddenly, out rolled fuchsia, zebra print Duck Tape. It all seemed random at first. But like rummaging through and inventorying the junk drawer, my writer’s brain began to assign meaning, importance and history to each item. Weaving her acquisition of them into her backstory. And slowly answering the questions Who gave them to her? What do these items mean to her? What has she gone through? Why did she bring them on her trip? 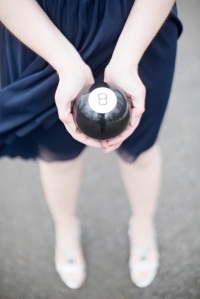 And perhaps a larger question: Can she let go of any of them?

Last month, Sharla Rae did an excellent post here on Tips for Writing Children, which got me thinking. Children and “stuff” naturally go hand in hand – we’ve all seen the magic of what a kid can do with a refrigerator box, right? What looks like fodder for our recycling bin becomes a time machine/beauty salon/race car/you get the picture.

Kids covet different things than adults do, and they covet differently. They can assign meaning to an item well beyond the scope of their current age and maturity level. Or maybe there’s no reasoning behind the item at all except the knee-jerk reaction of IT’S MINE. Like the iconic image of Linus with his blanket, what kids carry can be powerful, unquestionable and utterly necessary on their journey.

While writing a scene in Louder Than Love that involved five-year old Abbey bringing up the difficult subject of her deceased father to her mother Kat, I gave her items to help her and define her.

Abbey began pulling items out of her purse and placing them neatly across her lap. I glanced in the rearview mirror as she brought out a Pez dispenser of a kitty cat and a sparkly green guitar pick Adrian had given her. Next came a pair of glow-in-the-dark vampire fangs waiting for her mouth to grow into. She carefully stuffed them between her lips and did a chomp-test; no, still too big. She placed them on her lap as well.

“Then Jake said, ‘My dad says your dad is six feet under.’”

I jerked my head up in the mirror, but she wasn’t watching me. She had pulled a photograph of Pete out of her bag. It had wrinkles from over-handling but was still a great shot of him. We had gone to a Marathon Party at a friend’s apartment that overlooked First Avenue. Pete was in need of a haircut and shave, but looked positively radiant in the picture, wolfy teeth and all.

“And what did you tell him?”

“I told him my dad is in the stars and had two feet, not six! Then I said, ‘your dad must be crazy.’” The way she drawled out her last word made me long to leap over the seat and hug her.

“Good answer, Abb. You know . . . Dad was smiling right at you in that picture.”

She was holding the photo with both hands, quite close to her face. I leaned my chest on the steering wheel as we coasted down our street, trying to hold my heart together in one piece. “Yep,” I managed. “Everyone at the party was looking out the window watching the marathon runners race up the street, but you began cooing . . . you weren’t even two months old, riding in the pouch carrier on my chest. And he turned and smiled at you and I snapped the picture.”

“Hi,” Abbey said, as if she was cooing at a baby herself. “Hi Dad.” She neatly tucked the photo into her pocketbook, replaced her other treasures, and smiled.

Abbey and Kat could have had their discussion in the rearview mirror about the schoolyard bully without the aid of props, but I don’t think it would have been as memorable, or as meaningful. The kitty cat Pez dispenser and sparkly guitar pick reinforce the special bond Abbey has with her mother’s new suitor, Adrian. Because she was just a baby when her father died, Abbey needs that photo of Pete for her world to make sense. She’s had to deal with so much at such a young age, yet it’s important to remember she’s still a child. She’s been waiting to grow into those plastic vampire teeth, and she’ll still have to wait a little more.

These are her treasurers, for the moment.

So what is the state of your junk drawer? As a writer, you are the custodian of your characters’ items, the “stuff” their dreams – and your fiction – are made of. Choose wisely, choose with abandon, choose often. Make the things they carry count.

Comment below for a chance to win an e-book of Louder Than Love. Winner will be chosen and announced on Monday! 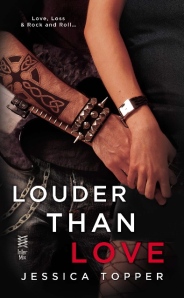 Jessica Topper is an ex-librarian turned rock n roll number cruncher. By day, she does bookkeeping for touring rock bands. By night, she creates books of her own.
She is the author of two novels from Berkley: Louder Than Love, and the forthcoming Dictatorship of the Dress (January 2015).

This entry was posted in Craft, Inspiration and tagged Jessica Topper, novel writing, Writers in the Storm, Writing Craft. Bookmark the permalink.

43 Responses to The Things They Carry: Creating a Mobile Sanctuary for your Characters