Using the Seasons to Fix a Blah Setting

Posted on March 12, 2014 by writersinthestorm

Quick … what’s your favorite season? Why? 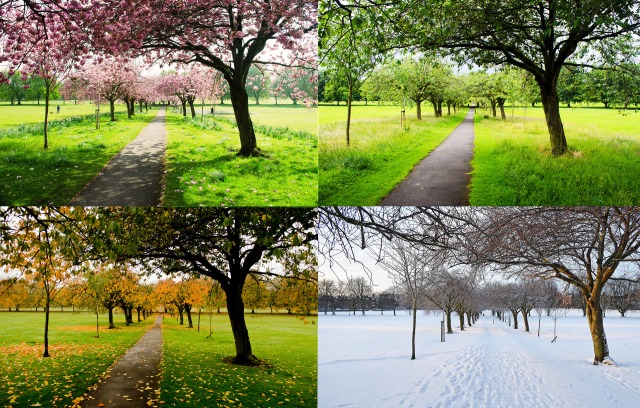 Mine is summer. I love the laid back feeling that comes with long, hot days, the smell of fresh cut grass, the sound of sprinklers.

Each of us connects with the seasons in a different way. A particular season may trigger certain memories or feelings, alter our moods or even our behavior. It’s not a new concept – acknowledgement of seasonal mood disorders dates back to the fourth century Greek philosopher Posidonius.

You’re all probably nodding – or shaking your heads – at this point and thinking, “what does this have to do with writing?”

I’ve been noodling details of my new book and while most of the pieces were coming together nicely, something wasn’t right. I couldn’t for the life of me figure out what though. Then I read a blog post about making setting more than pretty scenery. Hello big bright, proverbial spotlight.

The story was taking place during the summer. Actually, all of my women’s fiction manuscripts take place in the summer. Imagine that?! It wasn’t a conscious decision. Summer just seems to be my go-to season. The new story was working fine in summer, too. But you know that annoying little voice that insists something just isn’t quite right? Yeah, that one.

The main character in this new book has returned “home” after sixteen years to deal with her father’s estate. She not only has to come to terms with the truth behind the tense relationship she’s had with her father her entire life, but also the secret that forced her away all those years ago and find the inner strength to stand up to the ghosts of her past. Nothing that can’t happen during summer, right?

The idea of how a character might react differently to the same scenario based on environmental factors intrigued me. I started a few “what if” games. Guess what I discovered?

Summer was all wrong!

First, think about each season – positive and negative feelings, smells, mood. Make a list of everything that comes to mind. Here are a few that I came up with to help you get started:

Now, think about how those feelings and moods and smells can work for and against your characters:

Spring – Your character has been working in the garden, planting trees and flowers and installing a new fountain – the garden his wife has been dreaming about – when he gets the news that she was in a fatal car accident. How would he react on a beautiful spring day? Would he see the new growth as a sign that he needs to move forward? Would he grab the weed whacker and demolish all the new flowers because they shouldn’t live if she can’t.

Summer – Your character has been struggling with her self-image and self-worth – everything in her closet has been shrinking, her son keeps talking about his buddy’s amazing mom who mountain bikes and plays football with them, and her husband has been a wee less attentive of late – when she finds out her job has been eliminated. Will the prospect of endless hot summer days send her into a panic of being seen in shorts, or worse a swimsuit, next to awesome mom and give in to the thought that in this heat there’s just no way she can measure up or keep up?  Will the memories of relaxed summer days and long family vacations be the reminder that she needs down time to reconnect with herself and her family?

Fall – It’s been one year since your character has lost her mother and the holidays are approaching when she discovers that after years of trying, she’s finally pregnant. Does the news pull her out of the fog of loss, into the mounting excitement of new holiday traditions? Or does the news set her off, she’s angry that after all these years of trying, now when her mom is no longer around to enjoy her grandchild, she finally gets pregnant?

Winter – Your character has been waiting and waiting and waiting for her boyfriend to finally propose. It’s been a cold, miserable winter and she’s feeling a bit cranky when over a glass of wine by the fireplace, he proposes. Will she melt at the cozy, romantic setting and say yes? Or will the long, dark, frigid days that have kept them mostly bundled up inside backfire and make her feel smothered so that instead of saying yes, she’s breaking up with him?

If a setting doesn’t feel quite right play the “what if” game with the seasons. Will a change of season alter how your story unfolds?

I discovered that my character needed the crisp air of fall instead of the haze of summer. She needed to think about the upcoming holidays and the difference between spending another holiday alone in her fancy apartment or a luxury hotel in Paris. She needed the bundled warmth inside the stable during that first nippy day.

Do you have a go-to season that most of your stories are set in? Do you make a conscious decision what season to use?

Now just for fun, I found a survey that tells you what month you belong in. Mine came out Fall/autumn. Go figure!

This entry was posted in Craft and tagged Orly Konig Lopez, Writers in the Storm, Writing Craft, Writing Inspiration. Bookmark the permalink.

34 Responses to Using the Seasons to Fix a Blah Setting