Turning Whine into Gold: The Writer’s Spirit is Forged in the Fire

Posted on November 25, 2013 by writersinthestorm

Last week I had to un-friend someone on Facebook for violating my right to pursue happiness.

I can only assume he’s had enough of reading about the growing excitement for my debut novel, coming out in two short months now. Perhaps, after years of trading a time card for money, he can’t relate to what I’ve given up to chase this dream for more than a decade, and how I feel to see it come true. It’s only a book, he may be thinking. What’s the big freaking deal?

I don’t need to explain it to you. You’re a writer.

But under a business promotion for my blog post about a new organizing strategy, sorely needed now that my life has gotten crazy-busy, this man wrote, “Just go get a job!” and “Earn your own money and quit being a leech!”

It’s a head-scratcher. I have always made money from writing-related businesses, paid my taxes, and have never asked for a dime from him. But clearly, I can’t let him write such things on my Facebook feed—even if he is my brother-in-law. I deleted his posts, and as a preventative measure, un-friended.

I did not whine, then or now. I simply defended, with equanimity, a boundary that had already been tested too many times. Because what my brother-in-law doesn’t realize is that he isn’t saying anything new. I’ve heard this before from multiple sources—and one of them is inside my own head.

I’ll admit I’ve fantasized, from time to time, about walking into a corporation and plopping down my resume. They’d fawn over my advanced education and obvious leadership skills and say, “You’re worth $75,000 a year to us. Furthermore, we’d like to pay for your health insurance!”

And then I come to. My first husband worked in the hotel business, and before his suicide I watched his sensitive soul shrivel under ridiculous work conditions beyond his control. His efforts lost all meaning, as did, in the end, the money he earned from them.

I say, go after the work you love. This isn’t simple cheerleading—believe me, the stakes are high. How you spend your time is a vital decision that each person must make for her/himself, and revisit as necessary. If he is unhappy, I hope my brother-in-law does the same.

I got the better of my inner corporate wannabe once and for all in 2010. That year, as a New Year’s Resolution, I said, “What if I simply accept, for the next entire year, that I am on the right path, without second-guessing myself?” A bold decision, you might say, for a novelist who had already racked up almost a hundred rejections.

But you can’t argue with the results. Words meant to burn me grew easier to take as my inner fire grew strong. My husband, who waffled similarly about my contributions to the household, got on board like never before—and, inspired by me, followed his passion and started his own business as a financial consultant. I said less hateful things to myself. Surrounded myself with believers. The next year I got an agent, and within a year after that she sold my debut novel. I just signed the contract for my second.

All storytellers know that change comes about due to external pressures. I’d thank my brother-in-law for his, except that what he offered was too little, too late. His spiteful comments were just little flies landing on my great big world and simply needed to be flicked off.

My spirit had already been forged in the fires of internal and external criticism. Despite my brother-in-law’s advice, turning back isn’t an option. I must live a life that is true to who I am, even if my happiness bothers others—because you know what?

Every single day I am excited to get out of bed and get back to work. That, my friends, is a gift. And once your writer’s spirit has been forged in the fire, it changes substance. You can no longer melt down, no matter how high others turn up the heat. There may be a quick emotional flare-up, and a cooling, but then, from within, will come the glorious re-igniting of passion.

I have long loved Marge Piercy’s brilliant poem “For the Young Who Want To,” which begins:

Talent is what they say
you have after the novel
is published and favorably
reviewed. Beforehand what
you have is a tedious
delusion, a hobby like knitting.

If voices like that haunt your creative life, I urge you to follow the link and read the rest of the poem.

Then get back to writing.

Because in her poem, Piercy concludes:

Work is its own cure. You have to
like it better than being loved.

Work is its own cure because in this scenario, the worker is the one doing the loving. And love is always the greatest reward.

Have you too struggled on your writing journey? Share with us. 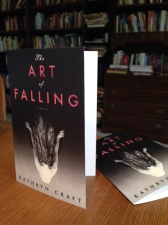 Kathryn Craft’s debut novel, The Art of Falling, will be released through Sourcebooks 0n January 28. If you would like to pre-order her book for holiday giving, she would like to send you one of these specially made cards to stand in for your gift until it ships. To receive your cards, go to her website contact form and send her your mailing address and number of copies ordered. Pre-order links are live at bn.com and amazon.com and through your local indie bookstore.

This entry was posted in Blogging Guests, Inspiration, Kathryn Craft and tagged Writers in the Storm, Writing Inspiration, Writing Life. Bookmark the permalink.

47 Responses to Turning Whine into Gold: The Writer’s Spirit is Forged in the Fire