Posted on September 16, 2013 by writersinthestorm

“The Tricky Part” of writing is different for every author, but hardly anyone is good at both dialogue & description. Laurie Schnebly Campbell talks about the skills required for each, and how to discover where your strengths lie.

And, did we mention that there is a prize for a lucky commenter? That contest closes Thursday evening at 6 p.m. (PDT) and we’ll announce the winner this Friday. Read on!

We all tend to be better at one of the Double D’s — dynamic description, or delicious dialogue. But if you ask a bunch of bestselling authors which they’re better at, they can’t always tell you…because they’ve worked on both to the point where now each comes easily.

Most of us aren’t at that point yet, though. We’ve all had the experience of re-reading a page we just wrote and thinking “aaack, I SUCK at [dialogue or description].”

I personally suck at description, and whenever readers asked what my characters looked like I’d tell ’em, “like the picture on the cover.” 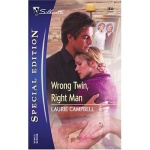 But for some reason, drat it, that didn’t quite seem to satisfy ’em. You want to know what my characters FEEL like, or what they do or think or say, no problem…but what they LOOK like? Or worse yet, what their house / dog / clothes look like? Shoot, I dunno!

Yet other writers have that same problem with dialogue. “I have no idea what these people would say.” “All my characters talk the same way.” “I wish I could do the kind of snappy dialogue you see with (fill in author).” “Why can’t I just SHOW what happens instead of having them TALK about it?”

On the positive side, when we’re bad at one of those jobs, we tend to be a lot better at the other one. No idea why, but most writers I’ve talked to about the Double D’s feel like they have a much easier time with either description or dialogue.

If you’re not sure where your strength lies, read these excerpts by two enormously popular authors and keep an eye out for what skills catch your attention:

“A single man of large fortune; four or five thousand a year. What a fine thing for our girls!”

“My dear Mr. Bennet,” replied his wife, “how can you be so tiresome! You must know that I am thinking of his marrying one of them.”

“Is that his design in settling here?”

“Design! Nonsense, how can you talk so! But it is very likely that he may fall in love with one of them, and therefore you must visit him as soon as he comes.”

Mr. Bennet was so odd a mixture of quick parts, sarcastic humour, reserve, and caprice, that the experience of three-and-twenty years had been insufficient to make his wife understand his character. Her mind was less difficult to develop. She was a woman of mean understanding, little information, and uncertain temper. When she was discontented, she fancied herself nervous. The business of her life was to get her daughters married; its solace was visiting and news.

“You could just leave me here,” Harry put in hopefully (he’d be able to watch what he wanted on television for a change and maybe even have a go on Dudley’s computer).

“And come back and find the house in ruins?” she snarled.

“I won’t blow up the house,” said Harry, but they weren’t listening.

“I suppose we could take him to the zoo,” said Aunt Petunia slowly, “…and leave him in the car….”

It was a very sunny Saturday and the zoo was crowded with families. The Dursleys bought Dudley and Piers large chocolate ice creams at the entrance and then, because the smiling lady in the van had asked Harry what he wanted before they could hurry him away, they bought him a cheap lemon ice pop. It wasn’t bad, either, Harry thought, licking it as they watched a gorilla scratching its head who looked remarkably like Dudley, except that it wasn’t blond.

Chances are that whatever had you reacting from the standpoint of a professional (“hmm, I wonder how the author did that” or “hmm, I would’ve handled this differently”) rather than the standpoint of a consumer (“sounds intriguing” or “mneh, yawn”) is likely to be the one you’re better at.

Of course, you might not even such a test-question to know which you’re better at…most writers can usually say pretty quickly whether their greater strength is in dialogue or description.

No matter which you’re better at, either way you have a built-in advantage. Because the same strength you’ve already developed in doing what you’re good at — whether it’s  dialogue or  description — will ALSO help you with what you’re not so good at YET.

Because they both require the same basic tools.

That’s what next month’s Double D’s class is about, and free registration to that four-week workshop will be a prize for somebody who answers this next question:

Which comes more easily for YOU, description or dialogue? And do you have any favorite tips for dialogue or description that I can pass along to the class? (If you’d rather I didn’t quote what you say, just mention that in your post — thanks!)

Laurie, who can’t wait to hear the answers.

A reminder about last week’s contest, courtesy of Chuck Sambuchino: On Wednesday we’ll announce the winning commenter from Chuck’s “launch” last Wednesday. If you haven’t commented yet, you’ve got until 6:00pm. (PDT) tomorrow.

156 Responses to THE TRICKY PART