WriterStrong: Keep Them Up All Night

First a quick congratulations to the winners of the two most recent giveaways: Deb Kastner and cwolffe both won a copy of Laura Drake’s debut release;  Karen Duvall will be taking a Margie Lawson class! Now, please give a warm WITS welcome to Melissa Cutler (take note folks, she’s doing a giveaway). 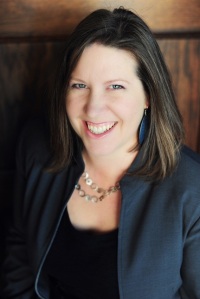 I’m excited to be on Writers in the Storm today talking about how to keep readers turning the page long after their bedtime. One of the best pieces of revision advice I ever got was from a national best-selling author: There’s no such thing as big problems in a manuscript. They’re all little problems.

I wholeheartedly agree. What can at first look like a sweeping, vague issue (like the ubiquitous term pacing) really just boils down to a chain of small craft choices an author makes on every single page. I used the word chain because when it comes to page turning potential, layering is key.

If you’ve been told, either by agents, editors, or crit groups that you have a pacing problem, don’t get overwhelmed. Yes, look at where you enter and exit each scene, but also try this: zoom in to a single plot point or interaction between characters and analyze how you build anticipation.

Okay, yeah. That’s great. But how?

My answer: promises and answers. Throughout a story, the author continuously makes leading promises, both big and small, about what is to come. Readers, then, anticipate the fulfillment of those promises. On a whole book scale, this is easy to see in romance novels—the reader is promised a happy ending and (hopefully) reads until the promise is fulfilled.

But it’s the hundreds of little promises an author introduces along the way that make up the lifeblood of anticipation and keeps readers up past their bedtime.

There are two distinct author skills at work here: 1) knowing how to frame promises that hook readers and 2) how to layer a momentum gathering chain of promises and fulfillment.

How you frame the promise: There are lots of ways. Here’s a few…

The point is this—don’t come right out and blab a character’s secret. Don’t lay out a character’s each and every intention up front. And whatever you do, don’t dump the juicy backstory in a big, unexciting clump. Tease! Hint! Make them turn the page to find out. Most importantly: don’t fulfill a promise until you’ve introduced at least one more.

I don’t know about you, but concrete examples work best for me. To show you what I mean, here’s a scene example from my June release, Tempted into Danger. On this page, the heroine has tried to kiss the hero, but he rebuffed her advances.

“Why shouldn’t I kiss you again?” she said. “Give me one good reason why we shouldn’t do something we both want. And don’t you dare deny it.”

You’ve just promised the readers they’re going to get an information reveal. Do you give it to them right away? No way. Make the reader turn the page to find out.

I used these next lines to let the reader see what’s going on with each character internally, which gives a hint that the answer is going to be juicy and emotional:

He whirled on her. The look on his face was dark, pained. “You need a reason?”

She raised her chin a notch. “Yes.”

Time to anchor the moment with some blocking that introduces the next promise—putting the two characters in close proximity. This particular plot beat, when an author brings two characters into each other’s physical space, is one of my favorites and gives readers lots of great anticipation of what is to come.

Three steps and he was before her, his hands on her shoulders. His eyes squeezed closed, and he lowered his forehead to hers.

Do I let him answer her question now? Only with an answer that introduces a new question…

He brushed his thumb across her cheek. “Because one kiss with you wouldn’t be enough for me.”

“Because all the things you deserve, I can’t give you any of them. I can’t even tell you my real name.”

Why do I let him answer that question? Because now the readers have the promise of something else, given that the two characters are embracing, with their faces close. What is that next promise? A kiss, of course! Does he kiss her in the next sentence? Nope. It’s another full page of them in close proximity before the actual kiss happens. And while they’re kissing—yes, while the actual kiss is taking place—I introduce the next promise, which is a doosy. It’s this subtle chain of author choices, this layering of promises, that pushes momentum forward page after page.

Combine this method of layered promises and fulfillment with scenes that start and end in the right place, as well as characters that readers care about, and you have yourself some great page turning potential. 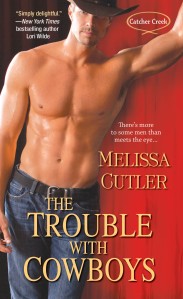 Giveaway: I’m giving away a copy (print or digital) of my sexy cowboy contemporary, THE TROUBLE WITH COWBOYS,  to one commenter. So tell me, what manuscript are you working on right now?

My thanks to Writers in the Storm for hosting me today. I love hearing from readers and am really easy to find at www.melissacutler.net, on Facebook (www.facebook.com/MelissaCutlerBooks ), and Twitter (@m_cutler). And you can always email me at melissa@melissacutler.net or sign up for my newsletter (http://www.melissacutler.net/newsletter/ ) to find out about my latest books and upcoming events.

Melissa Cutler knows she has the best job in the world, dividing her time between her dual passions for writing sexy contemporary romances for Kensington Books and edge-of-your-seat romantic suspense for Harlequin. She was struck at an early age by an unrelenting travel bug and is probably planning her next vacation as you read this. When she’s not globetrotting, she’s enjoying Southern California’s flip-flop wearing weather and wrangling two rambunctious kids.

This entry was posted in Blogging Guests, Craft, WriterStrong and tagged Writers in the Storm, Writing Craft, Writing Inspiration. Bookmark the permalink.

54 Responses to WriterStrong: Keep Them Up All Night